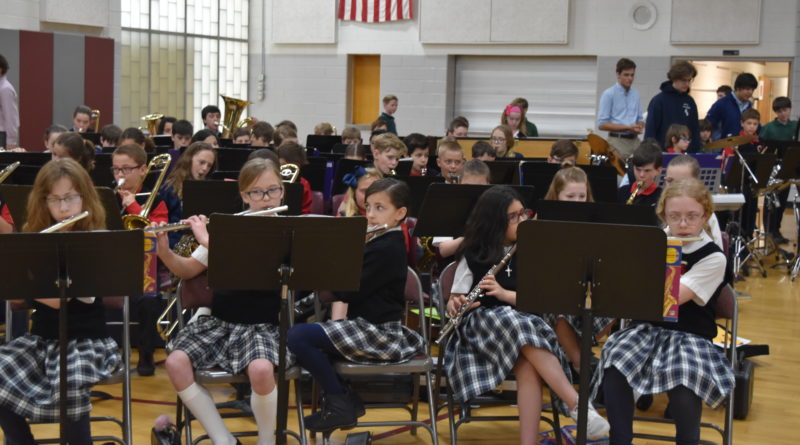 SALT LAKE CITY — The St. Vincent de Paul School gymnasium was filled with the sound of woodwinds, brass, percussion and even a few guitars on April 12 as student musicians from various Utah Catholic Schools gathered for the 11th Annual Diocesan Band Festival.

For the event, the musicians began the day in different rooms for practice sessions with others in their sections. They then regrouped in the gymnasium, where each school band played two numbers, then they collectively played “America the Beautiful” and “Strike Force.”

In addition, several students from the Juan Diego drumline instructed the younger percussion students.
Among the drumline students who worked with the younger students was Alex Hernandez, a senior who is considering a career in music education. In January, as his senior service project, he taught music classes at St. John the Baptist Elementary School and “discovered that I really like talking with kids and showing them music,” he said.

The purpose of the band festival is to bring band students together to see how other schools perform, give them the opportunity to play in a large group and also “so the kids in the elementary schools will see that, ‘Oh! I can keep going and play in high school,’” said Larrabee, who organized the event. Because some of the school bands don’t have all of the instruments, it also was a chance for the students to hear the full gamut of all of the families of instruments, he added.

The event was a bit frightening but also fun, said Keoni Magner, a fifth-grade student who plays the trumpet in St. Francis Xavier School’s band. Magner said he was excited about the chance to play with other people, but it was also scary, particularly because he got behind on a piece that they were sight-reading. He relaxed a bit, though, when “I realized most of the people got behind also, so I knew I wasn’t the only one,” he said.

Playing with all of the bands together was “exciting but weird,” he said, “because you don’t know all the instruments as well as you do when it’s your school, and you don’t know the conductors.”