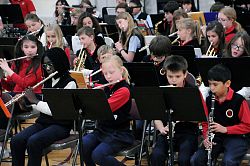 SALT LAKE CITY — The halls were alive with the sound of music April 11 at St. Vincent de Paul School for the 12th annual Diocesan Band Festival. More than 220 students from Catholic schools participated that day.

The number of schools involved varies from year to year based on the schools’ schedules, but this year “the stars aligned,” and nine schools brought students, event organizer and St. Vincent de Paul teacher Scott Larrabee said.

“I helped start this All-Catholic Band Festival in 2008 with Mark Longe, the former principal of St. Vincent School and now superintendent of Utah Catholic Schools, as a way for students to get to know each other through music. It was also the hope that younger students would see the possibility for playing music into high school and beyond,” said Larrabee, who teaches band, choir and music.

During the festival, the student musicians first broke into instrument groups and rehearsed some numbers with a band instructor. Then the entire combined band learned “Power Rock,” a selection many of them had never seen before.

After, they staged a concert for St. Vincent de Paul students and parents. Each individual band performed two numbers. Also during the program, the combined bands played “Creepy Crawlies.” The concert finished with “Power Rock.”

St. Vincent de Paul flute player Rhett Schorlemmer, 9, had never played in a concert before. “It’s really fun,” he said. “I like that all the schools get together at the same time.”

Samantha Linares, 16, an electric cello and bass player in the St. Joseph High School band, has performed publicly but never with St. Joseph’s or other Catholic schools. Before this school year, she attended public school. “It was amazing; I’ve never been to anything like it before,” she said of the band festival. “Having all the schools together is really good.”

That unifying effect is something that is valuable for all of his band members, said Bradley Sampson, band director at Juan Diego CHS and John the Baptist School. While Sampson teaches both high school and middle school bands, the Diocesan Band Festival “is one of the only events all 90-plus kids participate in together. It takes a lot of coordination.”

Although he has a few parents who come in on the day of the festival to help, Larrabee coordinates with all the band teachers and puts the band festival together on his own. It’s a lot of work but worth it, he said. “It’s good for the kids to see that other schools are doing these sorts of things.”