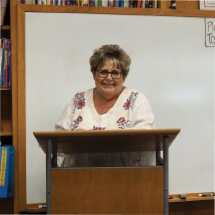 SALT LAKE CITY —Terry Stack, who is retiring from a career at St. Vincent de Paul School, can’t say enough about the rewards of her chosen profession. It’s something she pitches to her students.

“I always say to my kids, ‘Please think about becoming a teacher simply because the reward is unimaginable,’” she said. “‘This is the most rewarding job that you could have in the world, of teaching in a Catholic school where you can talk about God and go to church.’”

Stack is retiring because of her age, not because she has run out of energy or enthusiasm for her work, her students or her fellow educators.

“I know it’s time; you shouldn’t have 71-year-old teachers because technology is just advancing faster than I am, but I’m really going to miss it a lot,” she said.

Originally from Butte, Mont., Stack has been a teacher for more than 40 years, first for 10 years in public education in Montebello, Calif. and, for the last 30, as a teacher in Utah Catholic schools.

Stack taught at J.E. Cosgriff Memorial for a year before being asked to join the staff at St. Vincent’s. She has been at the school ever since. Earlier this school year Stack was unofficially made the school sergeant at arms, with the responsibility to call everyone to prayer each morning.

It was, Principal Gary Green said, “a semi-serious acknowledgment of her being in charge. Since she seems to be the center of everything, we made it her responsibility to call things to order.”

After losing her husband Neil suddenly to acute myeloid leukemia in 2014, Stack said it was her faith, friends and school community that carried her through. (Neil Stack had retired in 2005 after working for Salt Lake County as an engineer for more than 30 years).

“Teaching filled a void that was left,” Stack said. “I just found so much joy in it, it helped with the healing.”

Stack, who has known since third grade that she was going to be a teacher, has so many great memories of her years at the school that it’s impossible to single out any, she said. Throughout those years she has loved teaching fifth grade, which she says is the perfect grade.

“They are so much fun to teach; they have a real desire to learn,” she said.

Stack has more former students come back to see her than anyone Green has ever known, he said.

Throughout her career at St. Vincent’s, Stack has been loved by her peers, parents and students.

Stack has strong praise for her peers and the school’s administration.

“I benefitted from all the help and advice and guidance from Gary Green and Vice Principal Sarah Lambert,” she said. “I think that’s one reason I don’t have any burnout or never have – because of people like them. When you see people working that hard, and you’re working hard, then it goes to the betterment of the school.”

Stack’s plans for retirement including spending time with family and friends, gardening, volunteering at the National Ability Center and her home parish of St. Thomas Moore, taking classes at the University of Utah and attending sessions of the Utah Legislature. However, she is not hanging up her teaching credentials completely: she plans to substitute teach at St. Vincent’s as needed.